Curtis Harrington’s spotty but interesting career as a director was slowly drawing to a close by the time he made Ruby (aside from a short film, Usher (2000) and one more small screen television horror, Devil Dog: The Hound of Hell (1978) he had just a handful of television episodes and the not-terribly-impressive Mata Hari (1985) to come) and like a lot of his then recent films (What’s the Matter with Helen? (1971), Whoever Slew Auntie Roo? (1971), The Killing Kind (1973)) Ruby casts an older actress from Hollywood’s glory days in the leading role.

In Florida in 1935, local hoodlum Nicky Rocco (Sal Vecchio) is betrayed and murdered by his own gang leaving his grieving girlfriend Ruby Claire (Piper Laurie) to raise their child Leslie (Janit Baldwin) alone. Sixteen years later in 1951 Ruby is running a drive-in, staffed by ex-mobsters – including her lover Vince (Stuart Whitman) – and seemingly only ever showing one film, Attack of the 50 Foot Woman (which in fact wasn’t made for another seven years after the film is set…) A series of mysterious deaths in and around the drive-in suggests to Ruby that Nick is trying t take his revenge on the gang members and soon he’s possessed the body of deaf-mute Leslie.

There’s a lot going on here, too much probably as none of coheres into a satisfying whole. Ruby is a muddled affair that never quite makes up its mind what it wants to be, writers George Edwards, Steve Krantz and Barry Schneider throwing bits and pieces from all over the place (Sunset Blvd. (1950), Warner Bros. gangster films, the whole post-Exorcist demonic possession cycle) at their script but little actually sticks. At heart it’s an old-fashioned “revenge from beyond the grave” chiller but the success of The Exorcist (1974) demanded a possessed youngster so we get all the not at all well integrated business about Leslie’s body being taken over by the father she never met. The success of Brian De Palma’s Carrie (1976) – which also starred Laurie – casts an equally long shadow over Ruby.

The humour is often ill-judged and not particularly funny though some of the overwrought performances (though Janit Baldwin is quite effective as Leslie, even if she is asked to replicate Linda Blair’s contortions during the possession scenes) might raise a smile or two for all the wrong reasons. As indeed might some of the more egregious plot holes and inconsistencies – we learn that Nick was gunned down by his own gang and that Ruby is still pining for her lost love all these years later yet rather improbably she’s employed the self-same gang of murderers to work at her drive-in. One might have thought that she’d have gone out of her way to put as much distance as possible between herself and the thugs who killed her one true love. 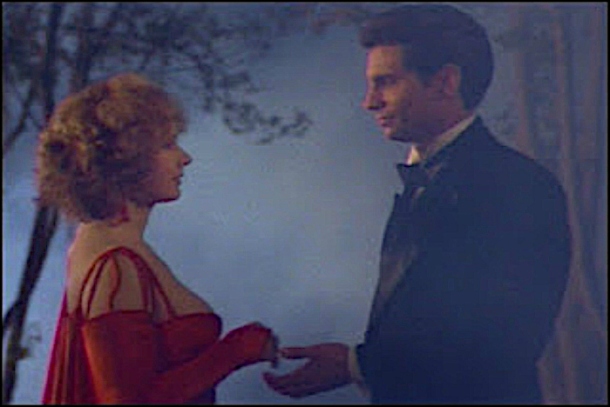 But that’s the script for you, a disorganised, cobbled together thing that feels like it was being re-written and improvised as production went along. The drive-in setting adds nothing much of anything to the story and the proceedings are hampered further by post-production meddling, allegedly by producer Steve Krantz. For many years viewers would have been familiar only with a television cut supervised by Krantz (which also found its way onto early VHS releases) which deleted a lot of the violence (in this version we never find out what Ruby keeps in her jar…) and inserted additional footage, mainly concerning the sheriff (an uncredited John Crawford) dealing with his wife’s (Mary Margaret Robinson) extra-marital affair. In the original cut Robinson appears only briefly in a jokey scene making out with another man in a car at the drive-in. Elsewhere we spend more time in the company of promiscuous teen Lila June (Crystin Sinclaire) (who tells a friend on the telephone that she got a necklace from “a really nice” admirer, seemingly completely forgetting that only moments before he’d tried to rape her…

These and other shorter scenes do nothing to help the already saggy pacing and add nothing at all to the story. Indeed it often feels like there are several soap opera-ish stories all going on at once in Ruby, only occasionally crossing paths, characters stumbling through the threadbare plot almost independently of each other. A DVD release subsequently restored the film to something closer of Harrington’s original vision although a silly last second twist involving an underwater skeleton, also added to the film after Harrington completed work, remained. There are some bright spots – Baldwin’s performance for one and an effective shot of a body pinned to the drive-in’s screen. But mostly Ruby is a barely coherent mess, and tedious to boot. To add sonic insult to injury the end credits roll over an awful love song written and performed by one Don Dunn.

In the UK, the film played as part of a double bill with Norman J. Warren’s Satan’s Slave (1976) and one wonders if maybe Warren had popped along to his local cinema to catch the programme as a scene in Ruby in with a projectionist is killed by reels of celluloid come to life and a very similar scene found its way into Warren’s subsequent Terror (1978).

This site uses Akismet to reduce spam. Learn how your comment data is processed.