The third film in Sang-ho Yeon’s zombie series following the animated Seoulyeok/Seoul Station (2016) and the worldwide box office hit Busanhaeng/Train to Busan (2016) takes a commendably different approach to its predecessors which turns out to be simultaneously the best and most disappointing thing about it.

The opening scene is set around the same time as the previous films. With the outbreak accelerating and seemingly out of control, the entire Korean peninsula (North and South have been reunited, a fact not mentioned in the earlier films) is being evacuated. A ship carrying Korean refugees to safety in Hong Kong is suddenly infested with hundreds of victims of the fast-acting virus. The in the panic that follows, Marine Captain Jung-seok (Gang Dong-won) is forced to abandon his sister and nephew, allowing himself and his brother-in-law Chul-min (Kim Do-yoon) to escape. Four years later the men are in Hong Kong, Jung-seok stricken with guilt. He, Chul-min and two other Koreans are hired to return to the long-abandoned and zombie-infested port city in Incheon to retrieve US$20 million left in a truck by a crime gang. Once back on the peninsula, the group are ambushed by a military outfit, Unit 631. In the battle, the other two Koreans are killed, Chul-min is captured and Jung-seok is rescued by a pair of sisters, teenager Joon (Lee Re) and the much younger Yu-jin (Lee Ye-won). They return him to the hideout they share with their mother Min-jung (Lee Jung-hyun) and grandfather Elder Kim (Kwon Hae-hyo). Jung-seok has to rescue Chul-min, retrieve the money now in the hands of Unit 631’s Captain Seo (Koo Kyo-hwan) and get out of Korea without falling prey to the dead.

The claustrophobic confines of the train was Train to Busan‘s unique selling point and it was a brave move on Yeon’s part to abandon it for something very different. Sadly what he replaces it with is a bit of a mish-mash of borrowing from other films (it’s not hard to detect the influence of the Mad Max trilogy, Dawn (1978) and Land of the Dead (2005), Doomsday (2008), Escape from New York (1981) and others in the film) and it skates perilously close to being “just another” zombie apocalypse film (the undead, we’re assured for the umpteenth time, are nowhere near as bad as the living), something we’ve surely seen enough of elsewhere. But it’s also to Yeon’s credit that he manages to keep the second-hand plot moving at the same breakneck pace as Train to Busan and brings a degree of freshness to the hackneyed proceedings.

The abandoned Korea is well-realised and the film’s release during the 2020 COVID-19 pandemic gave its images of eerily deserted city streets an urgency that it might otherwise have lacked. The release of the film in Korea in July 2020 was seen as the boon that local cinemas needed to recover from the months of enforced shutdown and despite a natural reluctance for people to return to the confined spaces of cinemas so soon after restrictions were lifted the film was the shot in the arm the industry needed and the film made its money back after a couple of weeks of steady business. 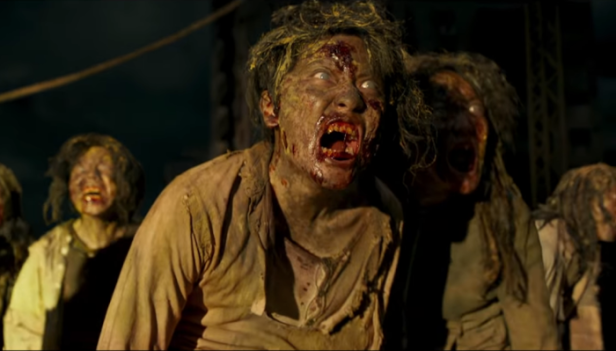 And despite the slightly disappointing, “been there, done that” feel there’s more than enough here to make it a worthy successor to the earlier films even if it never quite scales the heights of Train to Busan. The sight of the enraged hordes of infected swarming after their human prey like cells in a giant, multi-faceted organism is strangely exhilarating and the action scenes are great fun, even if some of the big set-pieces feel a little “computer-gamey” at times. A hair-raising car chase through the city’s zombie-packed, night-time streets is particularly good, Min-jung using her vehicle as mode of transport, sanctuary and weapon of mass destruction. And the inventive use of a brightly lit, VR-guided toy car (these zombies are virtually blind at nights and are attracted to light and sound) is satisfyingly clever.

Other bright spots are the death match between the zombies and Unit 631’s prisoners and another Mad Max 2 (1981) inspired car chase towards the end of the film, though this one is rather spoiled by some ropey CGI effects. Elsewhere technical credits are much more impressive – the score by Mowg (whose work had previously graced Akmareul boatda/I Saw the Devil (2010), Doomsday Book/In-lyu-myeol-mang-bo-go-seo (2012), Beoning/Burning (2018), The Witch: Part 1. The Subversion (2018) et al) is excellent, as is Lee Hyung-deok’s photography and the impressive production design.

Where Train to Busan was a film about simple survival, Peninsula is as much about the futility of greed, the crippling effects of grief and ultimately about redemption. Yeon manages to slip in a prescient undercurrent of racism – the Koreans in Hong Kong are as distrusted and despised as the Chinese became in some quarters after being blamed for COVID-19 outbreak. The cast is very good, Lee Jung-hyun and Gang Dong-won in particular though there’s not a bad turn among them and they’re given a great platform in the emotional finale that doesn’t quite match the tear-jerking final scenes of Train to Busan but which brings the film to a nicely uplifting close. Jung-seok’s redemption might be a tad corny (it comes complete with stirring music and lots of slow motion) but it works.

Lofty concerns like racism and grief are nicely handled but in the end they’re merely window dressing on a big, noisy film that’s lots of fun. The zombie hordes are nastier and more vicious than ever, the action scenes are flawed but plentiful and exciting and the performances are a all a cut above. It pales slightly by comparison to Train to Busan, lacking its element of surprise but that’s hardly a sin. Peninsula, released in the west as Train to Busan Presents: Peninsula, is a hugely entertaining addition to one of the most consistently surprising and inventive of zombie series.

This site uses Akismet to reduce spam. Learn how your comment data is processed.